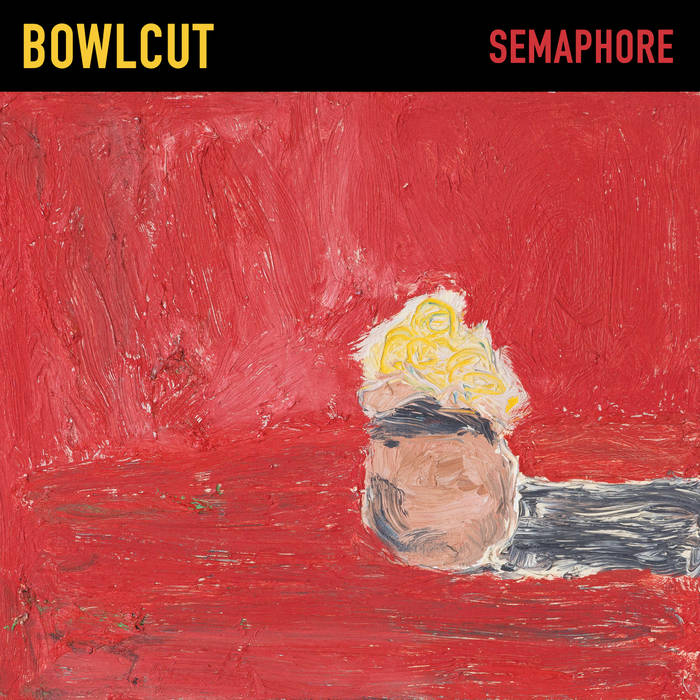 Recorded live at the Music Garage, Chicago, 2016 - 2017
Recorded, mixed, and mastered by Bowlcut

On Bowlcut’s sizzling new album, Semaphore (Amalgam), it’s easy to hear the bond that saxophonist Jake Wark, guitarist Matt Murphy, and drummer Bill Harris have formed performing together over the last few years. The group cleaves to improvisation, allowing its deeply interactive attack to direct its proceedings even when employing loose structural devices, moving easily between raucous, abrasive free jazz and cool, harnessed sound sculpture. On “All Toes, Part 1” Harris generates a synthetic low-end vibrato that conjures the sound of a distant helicopter as Murphy spreads out a blanket of long tones embroidered by cool arpeggios and Wark unleashes a precarious balladic improvisation with a striated tone that hovers ominously on the brink of chaos—but the track effectively concludes before they surrender control. They relinquish that sense of measure on other pieces, including the lengthy “Catadramous,” which winds though nearly ten minutes of ebb and flow. As noisy, explosive blowing recedes into hushed friction, Harris skitters across his kit, Wark unfurls astringent, yet gently articulated, curlicues, and Murphy complements quiet tangles of flickering string scratching with elusive electronic abstractions—only to morph into explicit melody that embraces jazz orthodoxy in its harmonic interplay and shreds it to pieces in rhythmic mayhem. I admire that Bowlcut sometimes adds novel elements such as tapes, electronics, and synthesizer into its mix; the found audio on “Stereo Detective” is distracting, but that’s a minor miscue on an album rich with promise.

Written by Peter Margasak for the Chicago Reader.
www.chicagoreader.com/chicago/improvising-trio-bowlcut-shares-its-interactive-acumen-on-its-promising-debut-album-semaphore/Content?oid=43340834

Reviewed by Kevin Press for BaddPress.com:

The most powerful free jazz often features extraordinary range. This is somewhat counterintuitive. The genre is most often associated with lengthy aural assaults, interrupted only long enough to flip to side B.

But the ability to separate blasts of freneticism with differently paced sounds, and perhaps even a bit of white space, can turn a good improvisational jazz recording into a great one. Bowlcut’s latest is a fine example.

The trio features Jake Wark on tenor saxophone, Matt Murphy on guitar, electronics and cassette tape and Bill Harris on drum, percussion and a mini-synthesizer/vocoder called the microKORG. Their new disc Semaphore bounces from what-was-that-sound sculpture to breakneck jazz noise and back again over the course of eight superbly intricate tracks.

The album rattles to life, almost literally, with “To Go’s” snake-like intro. Harris’ scattered percussion is joined by Wark’s equally dispersed saxophone and Murphy’s electronics. The two-minute track is not so much an overture to the album as it is a letter of intent.

“Kangaroo Revolt” comes in next, fast and hard. Wark’s sax and Harris’ drums are a devastating combination, delivering the album’s first whiplash moment.

“All Toes, Part 1” turns the volume right back down again. And so goes Semaphore, not exactly bouncing from one extreme to the next. But always on its toes.

The performances are seamless. There are so many wonderfully connected moments between the players over the course of this 40-minute disc. Through all the changes, the three remain fully composed and completely together. Two words you don’t often hear used to describe improvised free jazz.