I Saw the Cryptic Problem Of My Generation Destroyed 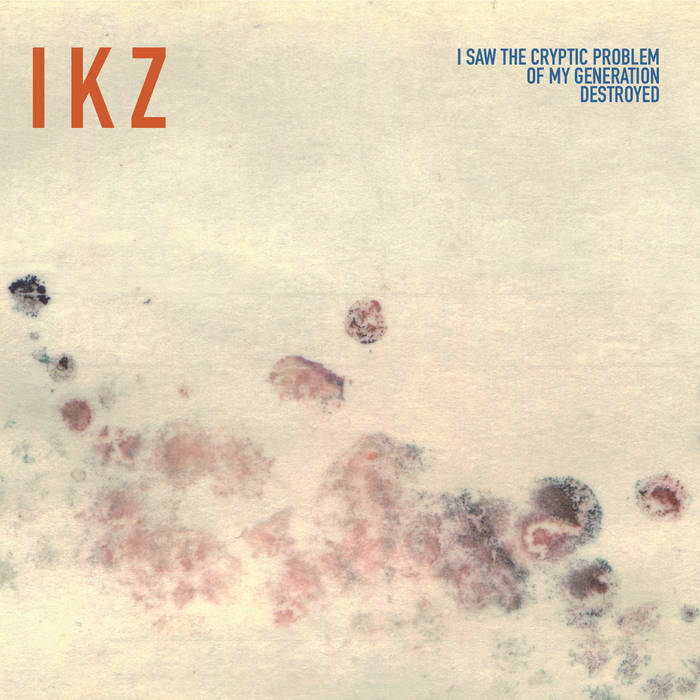 IKZ is a collaborative quartet composed of Chicago experimental music expats— Toby Summerfield on guitar, John Niekrasz on drums, Christopher Dammann on double bass, and Kevin Davis on cello and electronics. Their music combines open forms and real-time collaboration to create a propulsive, ecstatic mix of noise and improvised sound.

Christopher Dammann
Christopher is a composer, bassist, and improviser. Raised in Virginia, he moved to Chicago to be a part of Chicago’s jazz and creative music scene and earn a BM in Double Bass performance at Northwestern’s conservatory, performing in Northwestern’s orchestra while also leading a monthly gig at Fred Anderson’s Velvet Lounge until he passed in 2010. He has performed at WXPN’s World Cafe, Chicago’s Millennium Park Downtown Sound Series, The Kennedy Center Millennium Stage, PRI’s Live Wire and SXSW.

Kevin William Davis
Originally from Appalachian Tennessee, Kevin has been an integral part of the creative music communities of Memphis, Chicago, Istanbul, and now central Virginia. As an improviser and performer of experimental music, he has worked in the United States, Europe, and the Middle East. In addition to recording as a soloist, Kevin has duo recordings with Dave Rempis, Woody Sullender, and Mike Pride, and as a member of Locksmith Isidore, Desiring Machines, the İstanbul-based Islak Köpek and Hoca Nasreddin, Human Shaped Objects, and more. He directed the University of Virginia New Music Ensemble, the Sonic Crafts Orchestra, and Null Set, and is currently cellist in the EcoSono ensemble, Restroy, and IKZ. His compositions have been performed by Dither guitar quartet, Ekemeles, the Verge Ensemble, the Hezarfin Ensemble, Chicago Sound Map, and the UVA New Music and Percussion ensembles among others. His work can be found on labels such as Clean Feed, Evil Rabbit, Innova, Ravella, Dead CEO, ears&eyes records, and Amalgam.
kevindavismusic.com

John Niekrasz
John Niekrasz is a drummer, composer, teacher, and writer from Chicago, living in Portland, Oregon. John composes and performs original music based on language and emancipatory texts with record releases on New Amsterdam, Beacon Sound, Esp-Disk, and Ecstatic Peace. His ensembles include Methods Body, IKZ, Orchestra Becomes Radicalized, Why I Must Be Careful, IXNAY, Thicket, and Poor School. He received an MFA from the Iowa Writers' Workshop and created work as a fellow at Atlantic Center, ACRE Residency, and Résidence Point Dom. John lived, curated, and performed at Paris’s Cité International des Arts.
www.johnniekrasz.com