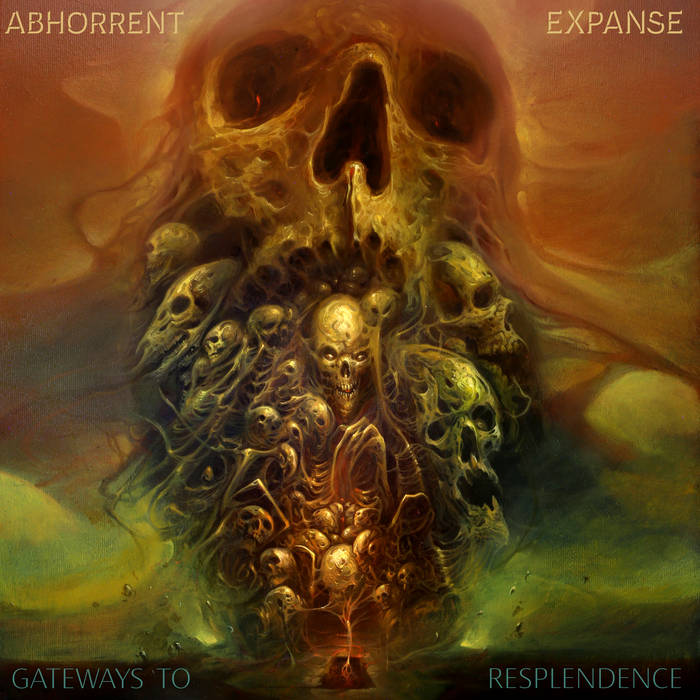 Anonima This is what happens when death metal, improvised jazz and amplifier worship collide. Takes a while to get used to but well worth the effort. Definitely not recommended, however, for those with genre expectations unless you’d like to have them blown away that is!

Funeral Fog Was recommended this album by a friend. Absolutely massive and chaotic!!

Abstract, ecstatic, and pummeling, ABHORRENT EXPANSE’s Gateways To Resplendence articulates the unspeakable dread which dwells in the sepulchral caverns of the mind. A grotesquely improvised manifesto plumbing from the depths of blackened death, funeral doom, noise, and free jazz, it defies the listener to decipher its riddles and confront its paradoxes. The ensemble builds on the deep history of collaboration between its four members to present a new way forward. Many duo and trio gigs helped them develop a new musical lexicon uniting the raw sonic intensity of extreme metal with the wide spectrum of textures common to free improvisation. By the time Erik Fratzke (Zebulon Pike, Happy Apple) and Tim Glenn (The Blight, Celestiial, Obsequiae) joined Brian Courage and Luke Polipnick in the studio, uniting the full quartet for the first time, the connection was immediate. Adam Tucker at Signaturetone Recording, a brilliant engineer and musician in his own right, used a variety of unorthodox techniques to help the band convey their vision. The resulting album is awash with contradictions, an organic, multifaceted, and deeply challenging listening experience that will push fans of both genres to their limits.

With a range of sonic components at their disposal, Gateways To Resplendence covers a staggering amount of stylistic ground, forging new and unnerving pathways all the while. “Annihilation Operators” launches into a snarled morass of distortion and blast beats, immediately followed by the angular abstraction of “Empirical Languages.” “Frost Suffocation” takes inspiration from John Zorn's Naked City with the quartet veering sharply through a series of solos and duos. “Invasive Insectoid Horror Thoughts” combines multiple layers of group improvisation, each played in response to the last. The result is a palpable skittering sensation more akin to Stockhausen than Sarcofago. “Baleful Reminders” pits the guitars and rhythm section against each other with fragile chords broken up by frantic interjections. Finally, “Arcturian Nano-Diamonds From The Tranquil Abyss” wanders through a vast hellscape of doom, drone, blasts, and noise, before descending into the final scraping throes of nothingness.

All ten movements on Gateways To Resplendence were improvised live by ABHORRENT EXPANSE on October 8th, 2020 at Signaturetone Recording in Minneapolis. The album was recorded, mixed, and mastered by Adam Tucker (Blue Ox, Wanderer, Sunless, Void Omnia), and completed with cover artwork by David Jorquera and design by Bill Harris.