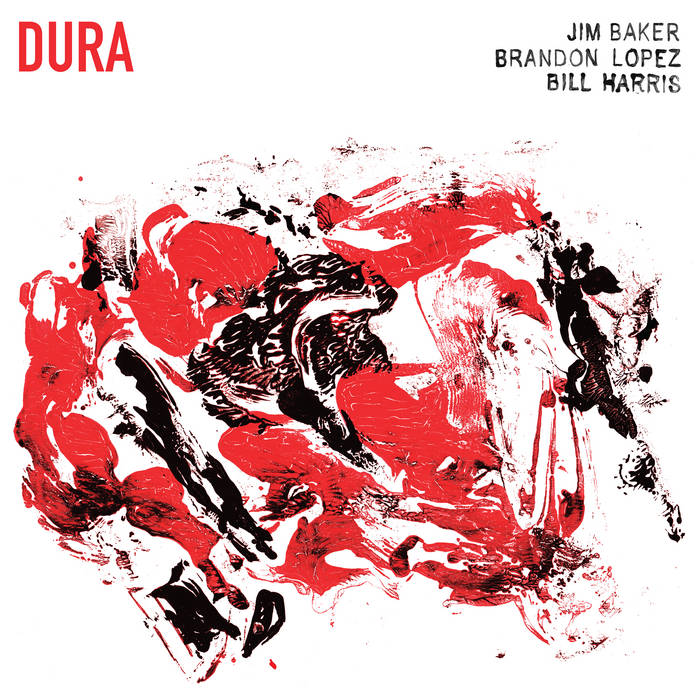 To improvise music with other musicians is to deal with processes of consciousness and unconsciousness that are mediated by the nervous system. It is also to face the possibility that things can go from right to very wrong or vice versa in a moment, often as the result of conscious choice or unconscious assumption. The dura mater is the outermost of three layers of membrane known collectively as the meninges. It wraps around the brain and spinal column, and if anything goes wrong with it, you’re in trouble.

Dura is the first offering by Jim Baker (born 1950; piano and synthesizer), Brandon Lopez (born 1988; double bass), and Bill Harris (born 1987; drums and percussion). The album and its constituent tracks were named after a trip that Harris took down an internet rabbit hole to investigate Kuru, a fatal neurological condition that for decades afflicted the Fore tribes of Papua New Guinea. The illness was transmitted by the practice of funereal cannibalism, in which the deceased were eaten by their family in order to release their life force back to the village. Says Harris, “At first glance it may seem grotesque, but there's something strangely affectionate and perhaps adoring about ingesting the body of a loved one. I think as creative people, we tend to do this with the things we learn and the people we learn from, perhaps in a more abstract realm, and in ways we may not be fully aware of. These things become part of us and can have both positive and negative effects on us.”

Since Harris instigated this session, and his label is releasing the record, it fell to him to name the tracks. But that doesn’t mean he’s the session’s boss; he’s in the company of two musicians known for going their own way. Jim Baker is a member of Extraordinary Popular Delusions, one of Chicago’s longest-running free improv ensembles, and musicians as disparate as Fred Anderson, Michael Zerang, Urs Leimgruber, and Janet Beveridge Bean have invited him to channel the unexpected; you may not know what he’s going to do, but you can be sure it’ll be worth the challenge to deal with it. Baker had played in Harris’ band, Bowlcut, and Harris is on the list of EPD’s alternates when their regular drummer, Steve Hunt, is out of town.

Baker and Harris had been kicking around the idea of a trio together, and they recruited Brandon Lopez when he came to Chicago for a gig with Dave Rempis and Ryan Packard. “I was blown away by his sound,” Harris recalls. “It's rare that I see someone have that much control and mastery over their instrument and their sound.” Adds Baker, “When Bill asked if I was interested in doing a session with him, I was definitely interested.” Lopez was game. “As a fan of regional dialects and cultural mechanics, I will say there's nothing like that Chicago sound and both of these guys are original examples of it.” A confirmed oenophile, he describes that Chicago sound as “Big bold America, like a California Cab.”

But the album’s opening gambit, “Kuru,” doesn’t rush to overpower. Bass, brushes, and piano probe, each restrained and inquisitive, before Baker goes his own way, undeterred by the other players’ sideway nudges. It feels a bit like someone put an ESP-era Paul Bley tune in the soup pot, stirred it up, and amplified the swirl of its meltdown. Is that creative cannibalism? No, more like an inherited behavior, like a man whose walk closely resembles his grandfather’s gate, as seen in old home movies. Another piano-based performance (there are three), “Anthropophagi,” reveals the trio’s particular balance of support and challenge. Early on, Harris’ fractured surges chip at the mass of Baker’s florid runs. When cracks start to appear in the pianist’s wall of sound, Harris and Lopez locks right into a short-lived but monumental bit of swagger; the bassist’s observation about Midwestern burliness proves on target after all. But this isn’t a game of two on one; alliances and approaches shift in a moment. The three pieces where Baker plays Arp synthesizer are especially mercurial. His glimmering tones and Lopez’ arco bass flash colors at each other, like differently shaded flares of lightning illuminating opposing cloud banks. Harris’ brief, subsiding snare strikes sound like an effort to build a bridge between them. Before the tune’s out, Lopez plays some fading repetitions of his own; transferred to a lower register, the sounds of construction turn into a hint of dub.

Despite the album’s titular references to the brain’s wrapping, the music’s action feels like it occurs deeper in the brain’s interior. Simultaneously chemical and electrical, the flashes of change and connection are synaptic. This nervous system is firing, connected, and fully functional.