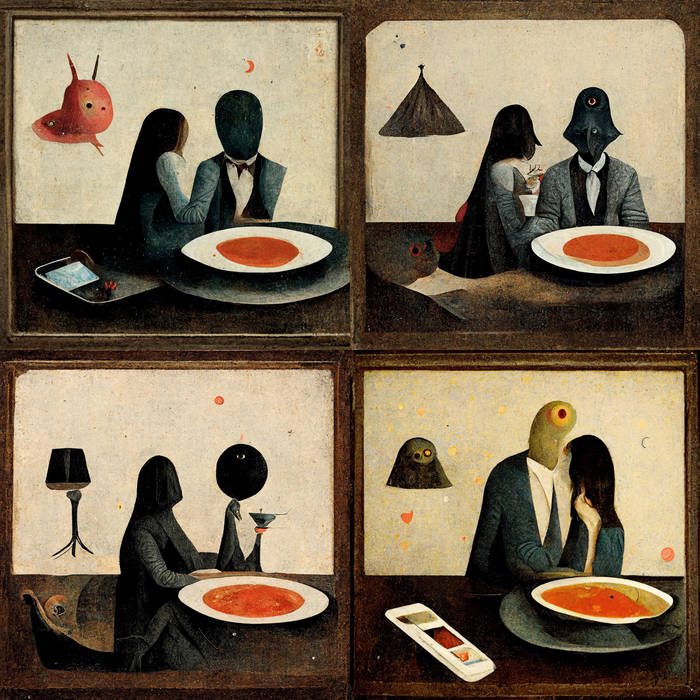 Free Jazz Date Night was an idea that I developed with Macie Stewart. It originally stemmed from a close friend Julia Dratel and an observation she made of a phenomenon that might be fairly unique to Chicago: dates getting ruined by free jazz shows.

Talking with Macie about organizing shows around town, we both lamented the kind of insider club feeling that can happen with more experimental musics. A feeling people might get if they’re not familiar with free jazz and improvised music, of being on the outside of an insiders club. What’s going on? Why are the musicians playing that way?

This eventually developed into a variety show of sorts, that coupled free jazz or improvised music with an MC, a comedian, and a Q & A with the musicians and audience members focusing on intention and aesthetics within their practice.

This recording is from a virtual iteration of FJDN that occurred over the pandemic. It comprises two short improvisations by my good friends, frequent collaborators, and musical comrades, Ishmael Ali and Bill Harris. Their musical process often plays with mimetic material without being constrained by it and their choices in regard to form are often informed by their compositional language.

Ishmael, as a new cellist, approaches the instrument without underlying assumptions or traditional obligations, focusing on timbral explorations and off-beat rhythmic interplay. On the second track, Ishmael returns to the guitar, expanding on his unique harmonic language with feedback and behind the bridge playing.

Bill ties everything together with strong angular shifts that consistently allude expectations. His mature improvisational skills add a cohesion throughout, allowing for some nice interplay between he and Ishmael.

A Date Gets Ruined By Free Jazz:

After dinner down the street, he suggested they stop in Cafe Mustache for a drink. The spot had plenty of eclectic DIY flavor and a little bit of a gritty feel. He wanted to show her that he had some cultural taste, even though he hadn’t been to any DIY art or music shows. He had been to two concerts In college. Both Metallica. He just got a job at Puttshack, a new tech start up in Chicago, and was living in The Couture on Milwaukee.

Oh perfect! There was a band! Saxophone, bass, drums. Nice. this will be something chill that will really set the mood here.

Wow things are heating up. She’s leaning in closer and closer when she talks to him. He’s got the job. He’s got the apartment. Now he just needs the wife. So many awkward dates recently…

Ok the band is about to go on. They’re not really saying anything

Huh what is this? What are they doing? Oh no she looks confused. He’s confused. She yells into his ear “what is this place you brought me to!?” he tries to explain he didn’t know… but it’s too late. The date has been UTTERLY RUINED.