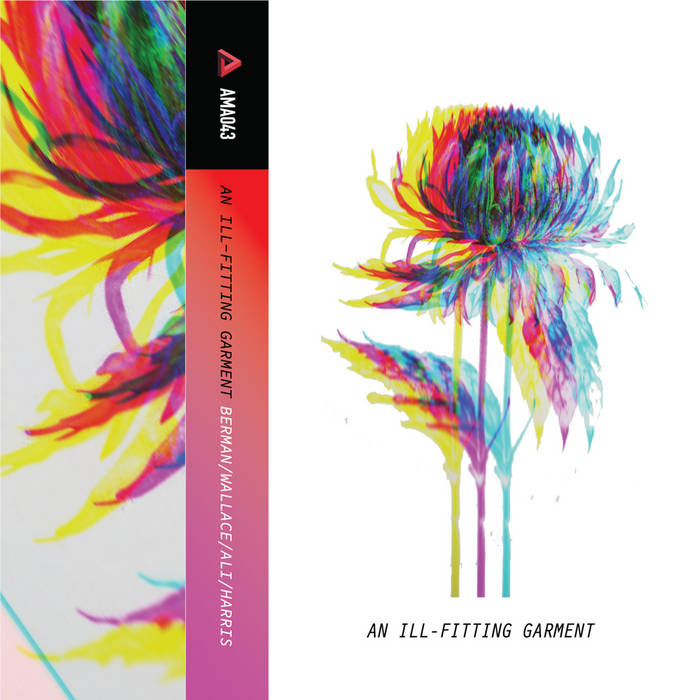 Recorded during the winter after a year of quarantining, Josh Berman, Eli Wallace, Ishmael Ali and Bill Harris convene for a live session at Marmalade Studios in Chicago. The resulting documentation, An Ill-Fitting Garment, focuses on acoustic interplay, often resulting in acousmatic moments which obfuscate who is making which sound. Individually, Wallace's ability to pull almost any sound from his prepared piano matches well with Harris's percussive textures, and Berman and Ali find common ground in pitched and harmonic material that can at times quickly displace in to textures nudging towards synth and electronic sounds. The quartet will celebrate the release of this record on February 18 at Constellation, sharing the evening with Lia Kohl and Macie Stewart.

Josh Berman is an internationally recognized cornetist and composer. He has led the acclaimed Old Idea, Josh Berman and his Gang, and his own trio. In addition to being an indispensable contributor to Chicago's jazz and improvised music scene, Berman has been a concert presenter with fellow Chicagoan Mike reed, producing hundreds of shows over the past 20 years. Berman's work has been critically acclaimed in the New York Times, Chicago Tribune, Jazz Times, and DownBeat, among others. His recordings can be found on the Chicago's legendary Delmark Records and more recently on Austin's Astral Spirits Records.

Eli Wallace is a pianist, improviser, and composer who resides in Brooklyn, NY, leading his own projects, performing solo, collaborating with other like-minded artists, and co-curating the interdisciplinary performance series Invocation. His work as a pianist displays his vast milieu of experiences from classical, jazz, and free improvisation studies while incorporating contemporary performance practice and elaborate piano preparations. The result is a singular voice that Bruce Gallanter (Downtown Music Gallery) asserts “has steadily grown into one of the most adventurous pianists on the scene…His prepared piano work is in a class of its own.” His compositions employ notational strategies to broaden the manner in which musicians produce sound and the ways in which musicians interact. Over the past decade, he has appeared on dozens of albums and has performed at such esteemed venues as The Stone, New York, NY, Roulette, Brooklyn, NY, Experimental Sound Studio, Chicago, IL, and the Outsound New Music Summit, San Francisco, CA.

Ishmael Ali is a first generation Filipino-Arab-American cellist, guitarist, improviser, composer, and electronic artist currently residing in Chicago. His work centers on exploring sound through improvisation, experimentation, collaboration, as well as a wide array of idiomatic approaches in an ever-changing, always-growing list of projects with diverse focuses and influences.Though varying drastically from group to group, a common thread in his work is the juxtaposition of seemingly disparate elements to create something new: both foreign and familiar.
Frequent collaborators include Bill Harris, Jeff Kimmel, Eli Namay, Je’raf, Fred Jackson, Avreeayl Ra, Adam Shead, Wills McKenna, Jakob Heinemann, Timothée Quost, Aaron Quinn, and Deric Dickens. In addition, Ishmael has played or recorded with Jim Baker, Ed Wilkerson, Carol Genetti, Peter Maunu, Josh Berman, Andrew Scott Young, Johanna Brock, Abhilasha Chebolu, David Leon, Raf Vertessen, and many others. In addition to performing, Mr. Ali is a co-founder and audio engineer at the recording space Marmalade in Chicago and was the founder and director of the now inoperative music and art space, Orotund Music. He continues to work as an organizer and promoter with varying degrees of regularity.

Bill Harris is a percussionist, composer, improviser, and audio engineer from Pittsburgh currently based in Chicago. He also operates and produces for Amalgam, a Chicago-based collective, and co-operates Chicago recording studio Marmalade. Bill has been active in Chicago's music communities since 2011, working at the intersection of free improvisation, jazz, noise, rock, and country. His music has been presented at Constellation, Elastic Arts, The Bop Stop, The Hungry Brain, The Hideout, Experimental Sound Studios, Spot Tavern, Beat Kitchen, Empty Bottle, and Comfort Station. In 2015 he started Amalgam, a 100% artist-run collective and label dedicated to showcasing works of improvised and experimental music in Chicago. Bill is also an audio engineer working in both studio and live situations, and operates an independent studio in Chicago with engineering, mixing, mastering, and production credits on labels such as Amalgam, Astral Spirits, No Index, 577 Records and Ears&Eyes. In 2020 he started recording studio Marmalade with Ishmael Ali, PT Bell, and Louis Clark.